India is home to 18% of the world's 6.7 billion people and its economy has boomed with fast gross domestic product growth and strong domestic consumption. As its people develop the capacity to respond to new fundraising methodologies. Usha Menon, Executive Chairman, Management Centre Asia, investigates how international non-government organisations are fundraising in India. The article that appeared in December-January issue of Fundraising & Philanthropy Australasia Magazine is on the link below
http://www.managementcentreasia.com/data/files/Asia/ushas_india_fr_article_dec_2011.pdf
Posted by Shweta Shukla at 11:47 AM No comments:

At the just concluded 22nd South Asian Fund Raising Summit, the leading non-profits of South Asia urged SAFRG to take a central role in advocating for policy reforms related to fundraising.
The non-profit sector is raising funds under lots of disadvantages. The taxation laws in respect of accepting foreign currency donations are not very friendly. Besides, the laws that give greater incentives to donors and hence increase giving are a non-entity. Many other countries in the world have very supportive policies. Why does our government shy?
Recent TRAI- Telecom Regulatory Authority of India regulations on tele-calling make it impossible for NGOs to raise money. Prior to Sept 2011 ruling, non-profits were exempt from embargo on calling. Now the commercial telecallers and NGO have been clubbed as one. This is very unfortunate. By one estimate NGOs raised close to INR 1000 million per year from tele-calling. This is a big jolt to the sustainability of the sector. There is no one to listen to NGOs on this. Any effort to meet officials at TRAI fizzles out at the lower bureaucratic levels only.
Direct mailers used to be a successful source of raising money from general public. But right now the quality of postal services available in the region is very poor. Often, 40% of the mailers that NGOs send do not reach the addressees.
What NGO sector lacks is a representative body that advocates for the fundraising rights of the NGOs. The NGOs at the summit urged that SAFRG should play that role in bringing the sector together.
SAFRG has promised to soon call a meeting for all affected NGOs to chart the future course of action. More details on this space soon.
Posted by Shweta Shukla at 12:03 PM No comments: 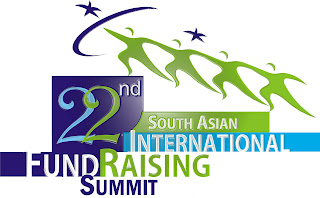 The 22nd edition of South Asian International Fund Raising Summit is happening from Dec.3-4 at India Islamic Center, New Delhi.
With a line of expert fundraisers as speakers the Summit is billed to be quite an attraction for NGOs. Also present would be people from the CSR domain.
The summit organisers have also kept the participation fee at levels affordable to all.
More details on www.safrg.org
Posted by Shweta Shukla at 12:57 PM No comments:


conducted by
SAFRG Institute of Fundraising
& Care and Concern Foundation.


"SAFRG is a think-tank on NGO sustainability. In the last 20 years thousands of people have benefited from courses conducted by it".
Posted by Unknown at 11:35 PM No comments:

A fundraising course for aspiring and mid-career fundraisers

SAFRG Institute for Fundraising and Care and Concern Foundation announce a "Certificate Course in Fundraising & Communications"
The 15 day course besides the class-room sessions would provide on the job training to actually raise funds for leading NGOs. At the end of the course their would be an evaluation, select candidates can get placement opportunities in fundraising.
More details on the links http://www.safrg.org/uploads/SAFRGCCFCFlyerfinal.pdf and http://www.safrg.org/default.asp
Posted by Shweta Shukla at 12:12 PM No comments:

Is happiness only about buying a new dress, going to an exotic location, splurging on material things? Take a pause …..there’s more to life …..happiness also comes from the smiling faces of these lovely , not so blessed , sick children . Thank God for the little mercies and the opportunity to put a smile on their sad faces . Thanks to Smiling Hospital Foundation of for the magic show put up at , on 11th June , 2011. ( Smiling Hospital Foundation of ) .

Posted by Shweta Shukla at 1:34 PM No comments:

SAFRG is looking for a CEO

South Asian Fundraising Group- SAFRG, is looking for a dynamic CEO who can lead the fundraising think tank to future growth. The time period for application is rather short, so click on the link below and apply.

Posted by Shweta Shukla at 11:05 AM No comments:

During the SAFRG Regional Workshop for South India in Hyderabad a question was asked from Anup Tiwari on whether credit card donations where donor just signs on the form would be acceptable in the future or not.

All these years Mail Order and Telephone order were a valid way for donation used by all fundraising NGOs in India. However, this is under review by Reserve Bank of India (RBI). According to RBI all transactions that use credit card without actual presentation of credit card, CNP- credit card not present, for example on-line donations, MOTO, punching credit card details on IVR- interactive voice response, need to build additional security systems.

MOTO was not intially part of this, but big stake holders like hotel industry that uses it extensively, expressed that it is also a subset of CNP but should be exempted from the proposed changes as above.

The latest circular from RBI http://www.rbi.org.in/scripts/NotificationUser.aspx?Mode=0&Id=6185 mentions that MOTO is not stopped as of now. However, the bank and card companies have to revert by Feb. 28, 2011 on the process how MOTO transactions would be handled in a more secure manner.

I would keep you posted on how this progresses.
Posted by Shweta Shukla at 12:24 PM No comments:

As promised the presentations are here. Please feel free to download.